We are engaged in several efforts in the area of biomechanics of the horse. As an example, one of our studies involves thinking about how a horse should be trimmed for what farriers call “medial-lateral balance”.

Argument for a Biomechanical Notion of Medial-Lateral Balance

The coffin-joint connects the P2 and P3 bones.This joint is well-represented by a single degree of freedom rotation about an axis. We propose that medial-lateral balance of a hoof trim should be quantified by measuring the orientation of this rotation axis relative to the ground plane.

In addition to being a reasonable way to discuss medial-lateral balance, we also feel that the orientation of the coffin-joint axis can be more robustly and accurately measured in a DP radiograph, than can distance measurements between the palmar aspect of P3 and ground. The palmar aspect of P3 is often characterized by complex shapes, and how it projects onto the image plane during radiography is also quite dependent on the details of the placement of the x-ray source and x-ray detector.

As an example of what we are talking about, in the figure to the right, we have trimmed to make our estimate of the joint-axis approximately parallel to ground. This particular foot would have to be trimmed very differently if we were trying to ensure that the underside of the P3 bone be parallel to the ground. See the difference? This case is an extreme example; but in general, we argue that what matters most is the biomechanical rotation axis being parallel to ground, and this should be used as a guide for the best medial-lateral trim. 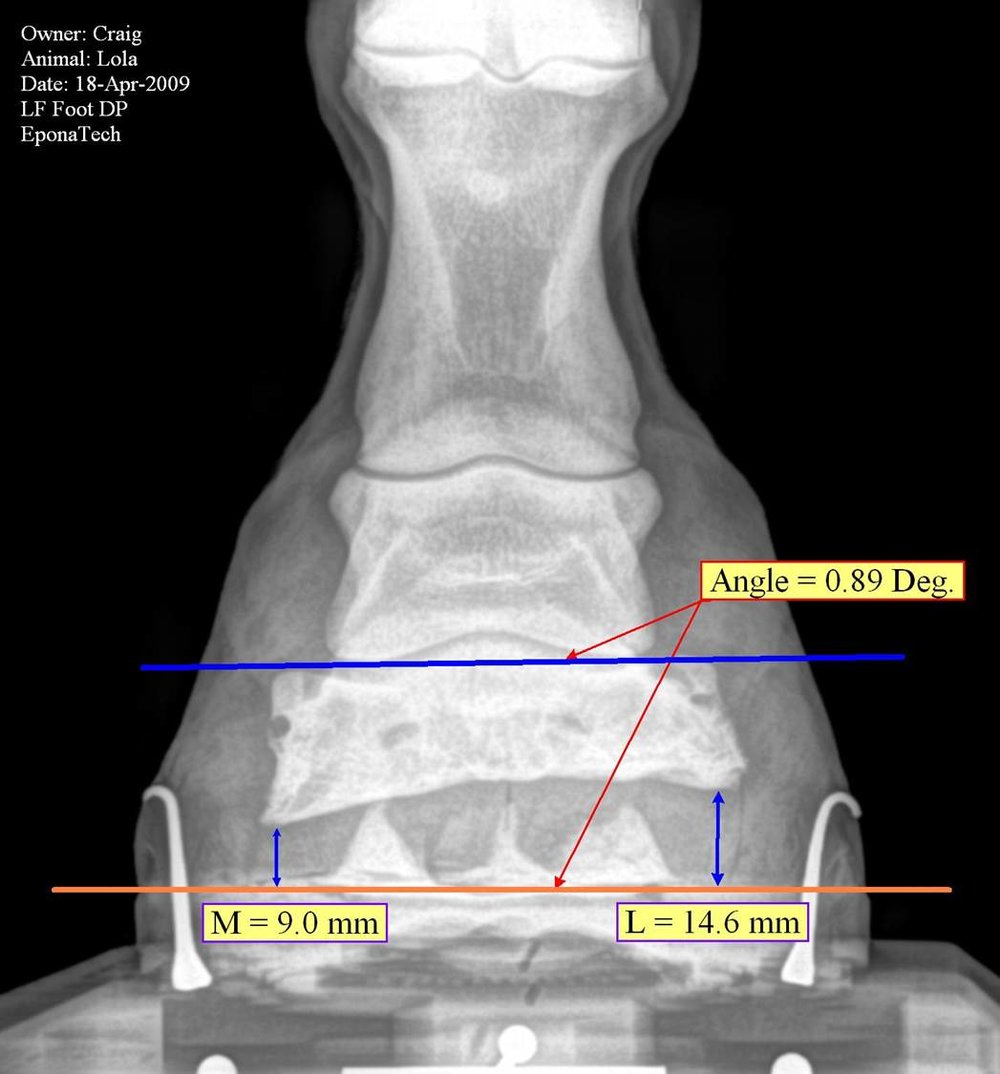 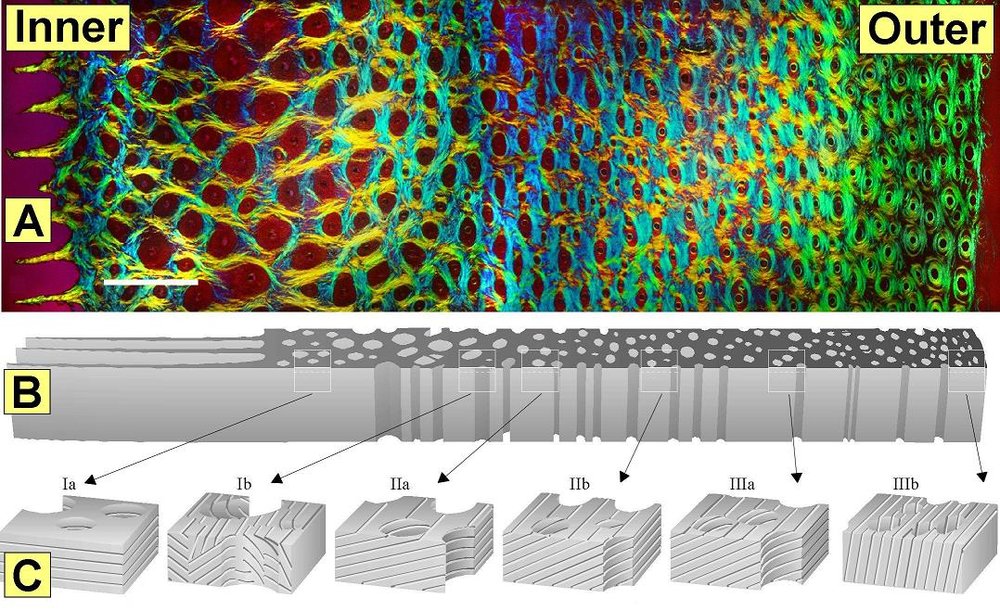 The horse’s hoof is full of amazing structures.

To the touch, the hoof capsule is very rigid and feels almost like dead wood. The outer portion of the hoof capsule is indeed made up of a dead material – keratin. The keratinous capsule resembles fiber reinforced plywood (figure to the left) . Plywood, like keratin, is also made of dead material, both are structurally very strong but this is where the similarity between these two materials ends. Unlike keratin, plywood is a man-made composite based on natural materials.

Keratin is found in the outer layer of any skin and is the product of a process called keratinization. This process starts with the production of live cells (skin stem cells) in the deepest layer of the epidermis (outer layers of the skin) called the stratum basale. The live cells migrate to and die at the surface of the skin to form a protective crust called the stratum corneum.

Although the dermis (lying beneath the epidermis) is not directly involved in the production of keratin, it plays a role by interacting with the basal cells. Skin is found in all mammals as well as fish, amphibians, reptiles and birds. The general purpose of skin is to provide protection from the elements. The hoof capsule is indeed made of skin — a very specialized skin.

Among the structures of the hoof wall are the “tubules” (figure to the right).  They can modulate their stiffness as a function of moisture and other factors.  The details of the tubules change depending on their relative location within the hoof wall.

Man-made materials, used in pads and shoes for horses, have various physical properties, which are measured in various ways.  Terms like stiffness, hardness, resiliency are all used in everyday speech, but they have specific technical meanings as well.

As an example, take polyurethane, a plastic used in many of the synthetic shoes on the market.  Polyurethane can be formulated in literally thousands of ways — many untried by man for applications or only seen in a laboratory somewhere.  So, not all polyurethane is created equally!

The video below shows two polyurethane balls.  If you held them, and squeezed them, you would feel the same stiffness.  That is, if you apply the same force to each, each ball would deflect by the same amount.  But although the stiffness is the same, as the video shows, another property, called resiliency, is quite different. 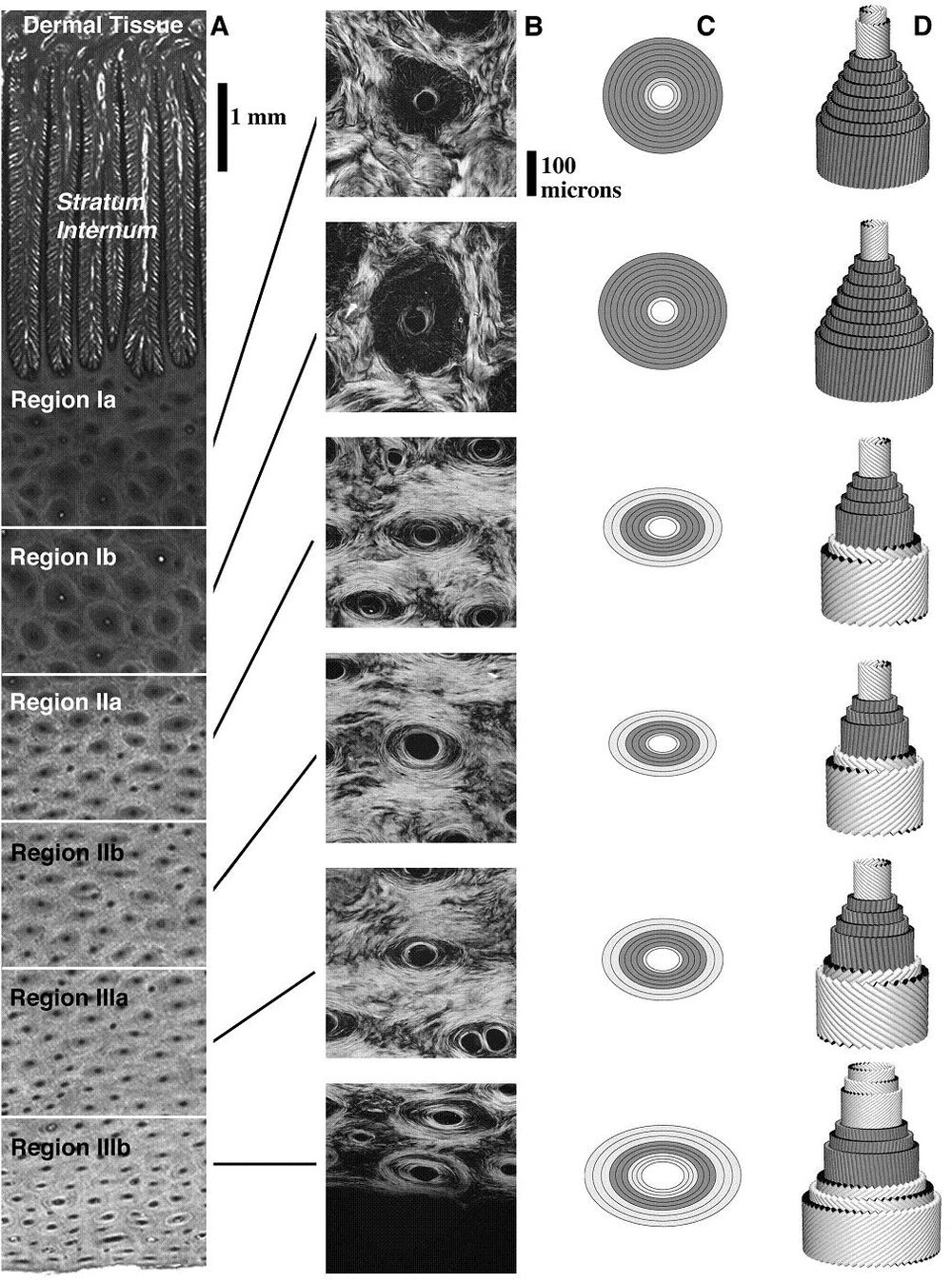 The resulting data gleaned from the video (shown in the figure below, right) shows exactly how much more resilient the white ball is, compared to the red ball.  In choosing to design a horseshoe or pad, there is a wide variety of material choices to make.