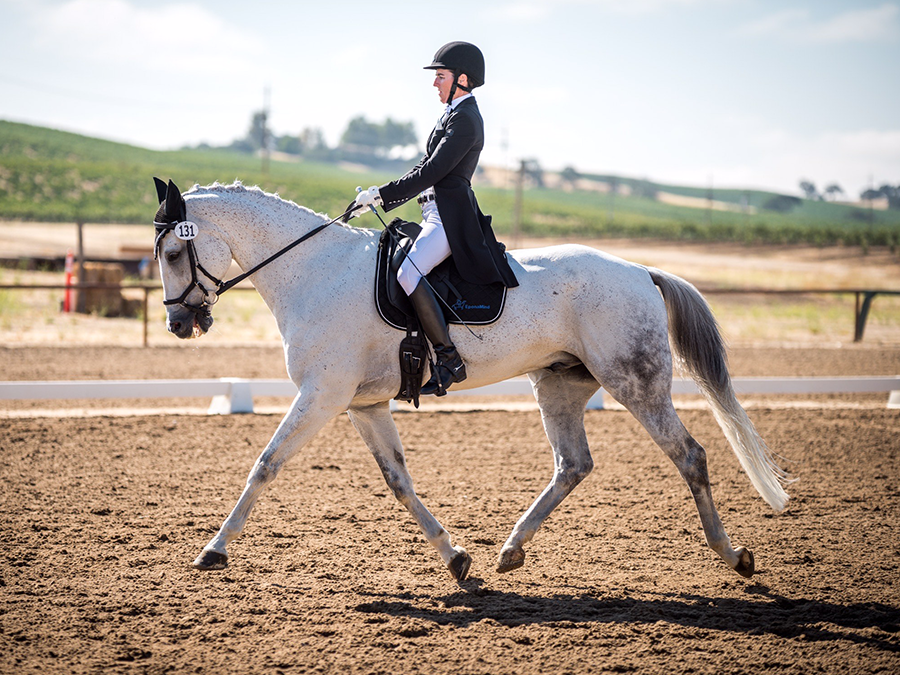 Before starting with EponaShoes, I had tried just about everything for my AQHA dressage gelding. I had struggled with his feet for years, trying different farriers and horseshoes. We tried steel shoes, aluminum shoes, egg bar shoes, barefoot, and barefoot with hoof boots. 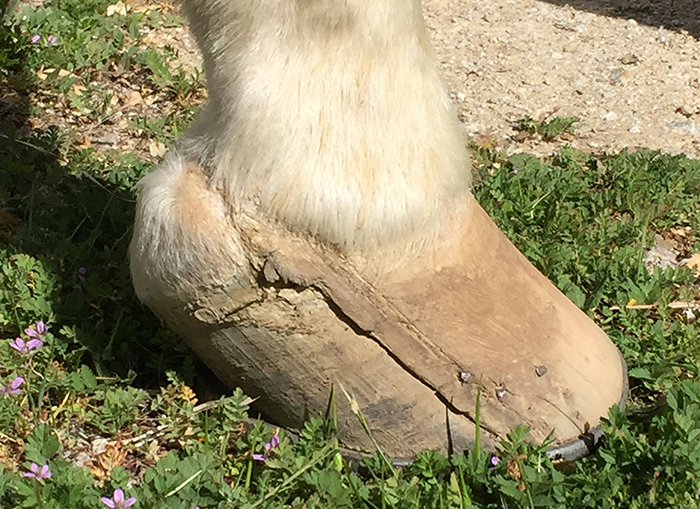 Before I got him, he had an accident involving a barbed wire fence which left him with a deep scar through his heel and coronet band, which caused a crack the entire length of the hoof. At least 2-3 times a year this crack would burst open at the coronet band making him very sore. Once we got started with the EponaShoe and EponaTrim, that crack never opened up again, and the crack became a very superficial line down the hoof.

On his first visit to EponaMind in early 2018, he had been in steel shoes, but his prior farrier had been letting the toes get very long, his heels were very contracted and his frogs never made contact with the ground.

For educational purposes, here is a photo of the too-large shoes he was wearing when he arrived, a set of appropriately sized steel shoes, and the EponaShoe he left wearing.

I was amazed at how rapidly the quality of his horse hooves improved and how fast his heels started spreading once he was in the EponaShoe. His feet changed so rapidly that we actually had to come back a week later to get bigger front shoes applied! Since his feet had undergone such a big change, Monique suggested that he have some time off while his body adjusted. When I started him back into work, I was thrilled with how much better he was moving! He finally had a solid base of support with balanced feet and was coming much more underneath himself in the hind end making collected work far easier for him.

In our first competition with EponaShoes, Sol successfully moved up to Prix St Georges. He continued to train and compete in his EponaShoes for the rest of his dressage career which included competing through Intermediate 1 and schooling the pieces of Grand Prix. With an improved base of support, his physique and way of going improved tremendously.

Our use of the EponaShoe did not stop in the dressage arena – we also did a lot of trail riding on various terrain – up to 15 miles per ride. He never got sore feet from the rocky or hard ground with his EponaShoes. We also tested the EponaShoe while jumping, galloping, and playing in the ocean. The shoes held up beautifully no matter what adventure we went on.

I am so thankful for the whole staff at EponaMind for transforming his feet and giving him his dancing shoes. Sadly Sol passed away in July of 2020 after battling internal melanomas. He loved his EponaShoes and earned many year-end titles in them – AQHA High Point at 4th level, Prix St Georges and Intermediate 1, as well as USDF All Breeds wins at Prix St Georges and Intermediate 1. I also earned my USDF Silver medal with him.