Well cared-for horses generally get trimmed and/or shod on a regular basis. A normal interval should be 4 to 6 weeks. Hopefully, the idea behind this is to maintain hooves at their optimal function and health. One may ask what does good hoof care consist of, and when and why could some of our actions become detrimental to the horse?

In my opinion everything starts with a good trimming approach — not the shoe selection. My basic criteria for trimming are the following:

Solar view: A large portion of the hoof should be behind the apex of the frog. The frog and heel width can be variable due to genetics but in general neither should be contracted. The frog needs to have a visible sulcus. The sole should be hard to the touch and have a good depth. 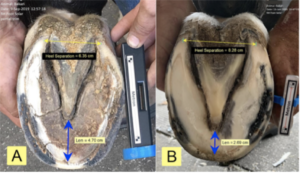 Lateral view: The sole body (a.k.a. the entire sole) should be close to the heel bulbs. The hoof should stand under the bony column (see figure 2B and figure 3). Palmar angles (figure 3) should be positive. I don’t believe in an absolute number for the palmar angle since there are variations in pedal bone morphologies. However, I prefer to see palmar angles ranging from 3 to 6 degrees. 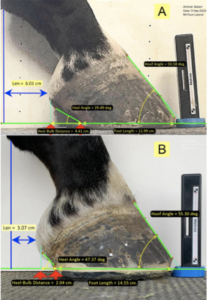 Figure 2: This image shows the same right hind hoof over a period of nine months. The solar view of in figure 1 is of the same hoof. Note the shape of the coronary band in images A and B. Heel-Bulb distance in figure A is 4.4 cm and is 2.0 cm in figure B.

Table 1: What does this table show us? The heel width improved by 2 centimeters. The toe length (Fig1.) is reduced, and so is the ‘heel to bulb’ distance. This means that most of the hoof capsule stands behind the frog apex thus lessening mechanical stress to the caudal area of the hoof. The hoof angle and heel angle numerical difference has lessened. When this occurs, the hoof is positioned more caudally allowing heels and sole arch to become less distorted. The actual foot/hoof length is actually longer thus providing a better support base for the limb. Finally, the position of the entire hoof is closer to the bony column as seen by the measure called ‘Len’ figure 2. 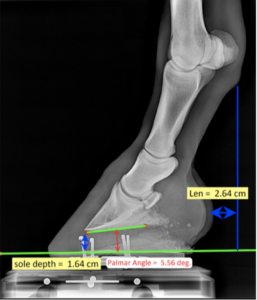 Figure 3: Radiographs of a left front hoof prior to trimming. Note the hoof stance as it relates to the bony column.

Figure 4: These are the lateral radiographs of the same right front hoof. Despite the poor hoof conformation, the horse was relatively sound with no diagnosed pathologies. Radiographs in A and B were taken on the same day and C was taken 12 months later. The bone stance is affected by the shape and health of the sole arch (shown in red). The sole arch generally keeps improving with time when a hoof is trimmed and shod correctly.

Dorso-palmar view: After trimming, the hoof capsule should not display a significant amount of shear as it relates to the articular area of the bone. Shearing forces can deviate the capsule and the sole hence moving the white line with it, so it is easy to be fooled by what is observed at the bottom of the hoof. One has to also take into consideration the innate asymmetry of the hoof when trimming and placing shoes. Full details on trimming and shoe placement of the hoof will not be addressed in this article.

Figure 5: The red dots approximately show the distal end of the first phalange, the black horizontal lines in B drawn on the hoof show the articular area between the 2nd and 3rd phalanges. Ideally, the tubules should align to the blue projected lines. I never top dress the entire hoof capsule since it allows me to check my medial lateral balance as it relates to the articular area of the bones.

In summary: A good trimming approach with proper shoe placement should preserve or improve hoof quality and function. Proper limb and hoof stance should be maintained on all four hooves. This is when hoof care is beneficial to horses.

If one excludes poor hoof care, one may ask why and when hoof care may become detrimental for the well-being of the hoof and ultimately the horse. In my experience, the lack of sufficient time plays a large role in being able to help hooves restore fully. When I was a child, it was not unusual to give a ‘sound’ horse with poor hoof conformation a rest. This meant laying off the horse for a few months in pasture either partially barefoot or fully barefoot. Hoof care is not the only factor contributing to hoof problems, riding also plays a significant factor. Resting a horse is obviously very beneficial at many levels. On occasion, it should be part of a preventative hoof care program. As the adage says “An ounce of prevention is worth a pound of cure”.

Unfortunately, many horse owners and professional riders fail at times to understand the long term consequences of poor hoof conformation. They often are not inclined to give their riding horses a rest unless they are truly lame. Veterinarians and farriers have no choice but to rely on short term hoof care solutions. This often results in over manipulative shoeing approaches. These short term ‘band aids’ last as long as the next horse show or the onset of lameness. Case in point, consider the palmar angle in figure 4A and 4B which increased by 5.7 degrees in one shoeing session. This change was significant but also necessary. The palmar angle improved with the first shoeing but the sole arch and capsule could not. Note that improving the palmar angle is a good start but it should never be done at the detriment of soft tissues and capsule function. These latter two take longer to recover. It is therefore advisable to recommend a period of light work till the soft tissues and capsular deformation subside somewhat. The horse in figure 4 went back to full training after 3 months – about the time for the sole arch to regain some natural definition. In my practice, I have educated my clientele to not expect overnight fixes when dealing with bad hoof conformation. Surprisingly I have never had a backlash from having to tell some impatient clients to find another farrier.

The equine industry encompasses different riding disciplines with often a specific horse breed per discipline. It is obvious that shoes need to be adapted for traction and wear needs. However, beyond this should any hoof care professional try to alter the innate shape of hooves and gaits via shoes? Figure 1A and 2A show an example of what happens when a farrier is dictated to shoe for artificial gaits rather than the well-being of the hoof and horse. In this particular instance, the trainer wanted a more ‘sliding’ effect on her dressage horse. I was told that this was ‘to allow for a longer stride in the hind quarters’. Note this is not an isolated case, sadly enough this scenario happens with other disciplines. In an ideal world, locomotive weaknesses should be addressed by proper training not by artificial shoeing means. As studies of equine locomotion and hoof care improve I hope that these outdated approaches to shoeing will hopefully subside. 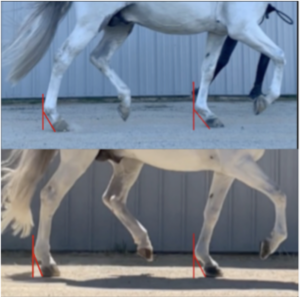 Figure 6: The top picture is of a Lusitano stallion upon arrival at my facility, the lower picture is the same horse 2 months later. A longer toe (and/or shoe placement) may make it appear to have a longer stride, but I believe in trying to keep the foot ‘under the bone column’ (e.g. figure 2) for better movement and health.

Current breeding practices have pushed equine conformation beyond its natural biomechanics in favor of extreme gaits. This is another form of manipulation which is detrimental to the horse, and which makes the job of the farrier and veterinarian so much harder.

Take home message: Try to work with the innate nature of the hoof and ‘assist’ rather than ‘manipulate’. There is very little that can be changed with hoof function. The goal of correct hoof care is to maintain hooves to optimal health and function without excessive manipulation. Take your time, educate your clientele about the importance of giving time for hooves to restore. Keep a simple approach to hoof care.