The Value of Measuring the Hoof

This originally appeared in TrailBlazer Magazine, 2008.

by Monique Craig, The Epona Institute

Why Measure the Horse’s Hoof

When it comes to the horse’s hoof, we have a unique situation unlike any other animal on the planet. What is unusual with the horse’s hoof is that it goes through significant changes due to fluctuations in the weather, as well as different trimming styles and shoeing methods. The genetic make up of the hoof, types of surfaces, and riding styles will also play an important role in determining its shape and its function. Ultimately, all these factors will greatly affect the biomechanics and soundness of the entire horse. It may be somewhat easier to have a long-term control over training methods and riding surfaces. The elements and the affects of trimming and shoeing may be a little bit more difficult to control.

Between hoof trimmer or farrier visits the hoof grows out, and as it does so, the angles often change. Weather, in particular moisture content, changes the physical properties of the hoof – the stiffness of the hoof capsule can vary by a factor of two with moisture content. All of these things mean that the horse’s biomechanics are changing a little bit all the time. How the foot is allowed to grow, how it is trimmed, and what kind of shoe is used or not, can, in the long term, result in large changes in the hoof’s shape and physical properties.

There is really no other situation analogous to this that we experience. Perhaps the closest comparison would be if you were a track athlete that is training, but the shoes you wear are changing all the time – for a while they are high in the heel, then suddenly one day, the heel is 1/2” shorter. Sometimes the shoes are harder, some days softer due to weather changes. Perhaps during several weeks your shoes were 1” longer in the toe than they have been a few weeks before. Faced with this, the human athlete would need to be constantly compensating, and this is what horses must do.

Given this unique situation that affects the horses we love, we can do something that at first sounds a little strange – we can measure the hoof! If we can measure the hoof, we can see how it is changing. If the horse is going really well, and is comfortable and sound, it might be a good idea to measure the hoof to record the exact angles, lengths, and other measures that make your horse happy. Then, a few months or years down the road, when for seemingly mysterious reasons your horse is uncomfortable or even lame,
you can measure again, and look for the differences compared to your record when your horse was happy. If you move or have to change your hoof trimmer or farrier for any reason, you can show the new person in charge of your horse’s hoof how it was trimmed – all the angles and other measurements that affect their biomechanics!

Some people keep incredibly detailed records about their cars – every oil change, every servicing. But when it comes to their horse (which in some cases is worth more than their car!) they only have vague guesses that ‘maybe the heels used to be lower’, or ‘maybe the toe was longer before’, and have no quantitative measurements at all! Its time to get serious about your horse’s feet! Lameness is the second leading cause of loss of use of the horse, right behind colic, and so it is a huge problem and one that leaves many horse owners and even equine professionals bewildered!

A few words of caution: When taking measurements and comparing data, one must make some allowance for seasonal changes and for the type of trimming and shoeing methods. The hoof in metal shoes is different than a barefoot or plastic-shod hoof. Also be aware that no two hooves will completely behave the same, loading forces at the hoof and riding will alter a hoof. When it comes to making use of measurements, it is preferable to aim for an acceptable range than an exact number. Although I am a big
believer in measuring, I am not a big believer that any one ‘formula’ works for all horses. One formula does not fit all horses! In all the measurements that I will discuss, there is not a single, correct value we are after – at best we can think in terms of normal ranges.

It is beyond the scope of this article to discuss all the possible things one might measure, even if we restrict ourselves to the hoof itself. The software package Metron [1] is used by veterinarians, hoof trimmers, and farriers to measure and document the hoof and is capable of measuring 69 different numbers for a single hoof! In this article, I will restrict our attention to the 8 or so most important measures.

Figure 1: How far is the hoof ‘in front of’ the fetlock? The situation shown on the left is not desirable. The hoof on the right is better.

Steps to Analyze the Hoof

The first thing is to start by looking at the hoof externally. Stand your horse as square as you can and start taking a lateral view (side view) of your horse. Look if the hoof is standing far in front of the fetlock or closer to it. It is preferable for a hoof to stand under the bony column; this means that the distance from the perpendicular line of the fetlock to the bulb of the hoof is not exceedingly large.

The next thing you want to take is a frontal view of the limb. Ideally, the hoof should stand square under the bony column; too much deviation to the outside (lateral side) or inside (medial side) may cause a problem for the horse. Remember that whole body conformation can be the result of what is done to the hoof. Remember also, that most horses have some natural conformational flaws. Forcing visual ideals to a limb or hoof can be very dangerous.

The next thing is to look at the hoof more closely. Figure 2 explains the concept of “support length” – this is the length of the foot that supports the horse’s weight. It is important, as shown in figure 3, that this support length be located towards the back of the foot. In figure 3A the support portion of the foot is too far in front of the bulbs, whereas in figure 3B it is in a good location.

Figure 2: Support length can be visualized from a sole photo, or from a lateral (side view) photo (it is indicated here with the blue arrow). The photos above are the same hoof on the same date. Support length is the length, from toe to heels, of the hoof capsule.

Figure 3: These two hooves are of similar size but have very different shape. The hoof in figure 3A has less support length and the support is ‘too far forward’ relative to the bulbs. We can also see that the hoof angle and heel angle are not well matched in figure 3A. The difference between these two angles should be less than about 10 degrees on average. The hoof in figure 3B has a good conformation.

A very basic measurement is the hoof angle. This angle is often measured mechanically with the help of hoof gauge. You may have seen your farrier use it. Another measurement of interest is the ‘heel angle’. A low heel angle is representative of a low heel and often under heels. Remember that we are not looking at a specific number but rather at range.

The interesting thing for me is to compare the hoof angle to the heel angle. If the difference between the hoof and heel angle is large, it often means that the entire sole (support length in the measurement) is shortened. This is not ideal. After years of measuring hooves I have also noticed that most horses
that have a good support length have a hoof angle that is only slightly larger than the heel angle — not more than 10 degrees difference.

Figure 4: The “heel under-run” and the “heel height” are important, and can change over time. More important than a certain value is the ability to compare the same hoof over time. These images are of the same hoof, which has shown some improvement, although the heel height is still on the low side.

The distance from the heels to the bulbs is very important. Heels give support to the bulbs. Anytime there is a great numerical distance between the bulbs and heels, it is very likely that the entire hoof capsule is distorted. Capsular distortions will in turn affect the biomechanical function of the hoof by displacing tissues and affecting the stance of the bones. 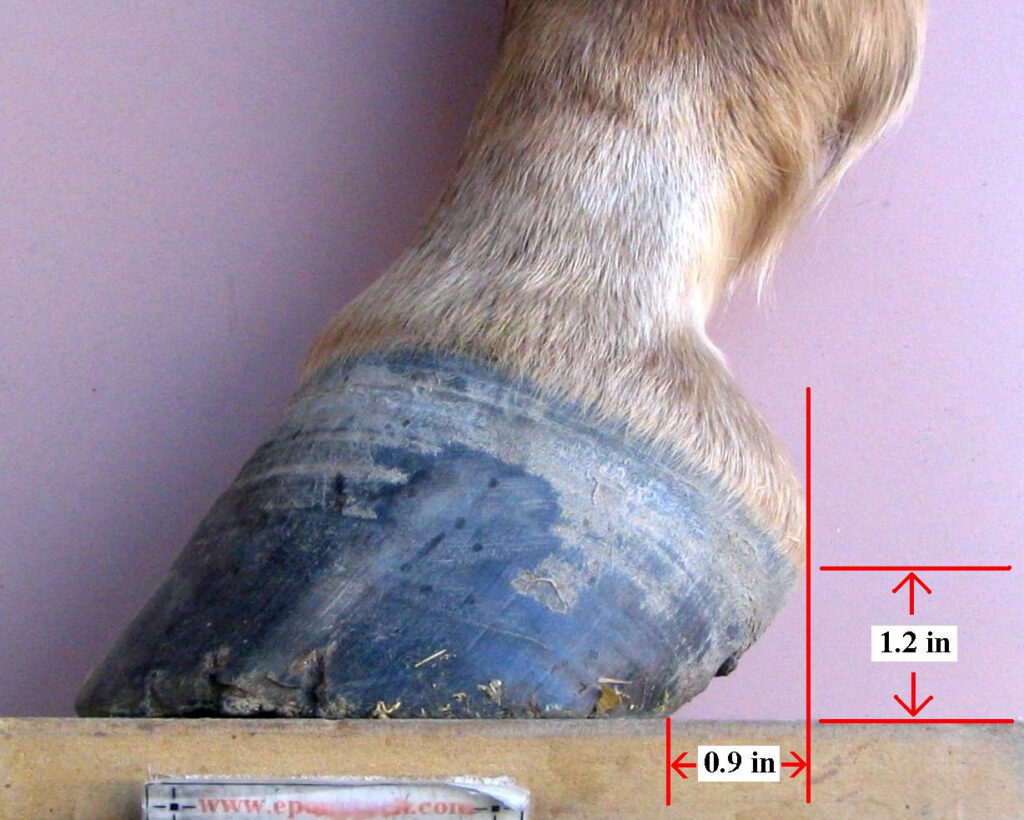 Figure 5: This horse has a rather large “heel height”. Compare to the measurements shown for the horse of figure 4B, which is too low. 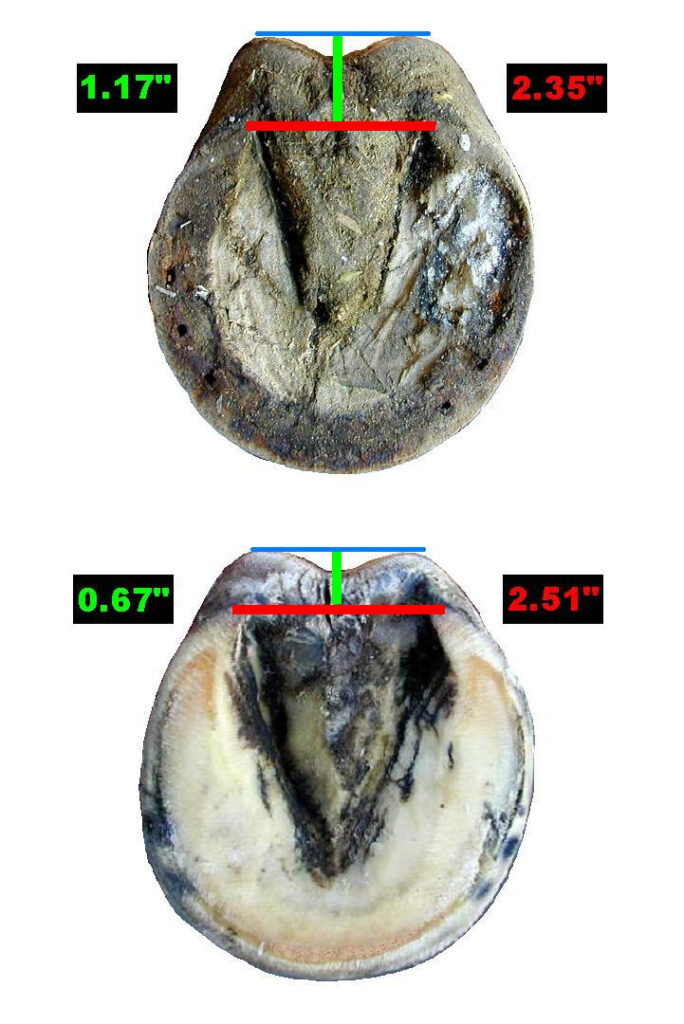 Figure 6: The distance between the heel points (in red) and the heel underrun (in green) can be measured from a photo of the underside of the hoof. The pictures are of the same hoof over a period of six months.

The heel width is important. A narrow width often indicates contracted heels. The images in figure 6 show before and after photos of the same hoof over about a six-month interval. The red horizontal bar shows that the space between the heel points widened somewhat. The green vertical bar shows that the distance from the heel points to the bulbs shortened. These were both good changes for this hoof, the resulting values are in what we believe to be a better range.

Getting all these measurements into good ranges adds up to the fact that your horse will be able to comfortably bear its weight and perform at its best. Our goal is that the hoof capsule and sole provide support to the limb. Of course looking on the outside of the hoof is generally not enough. It is very important to take ‘preventative’ radiographs once in a while. The first radiograph to look at is a lateral radiograph – a radiograph taken of the side of the hoof. 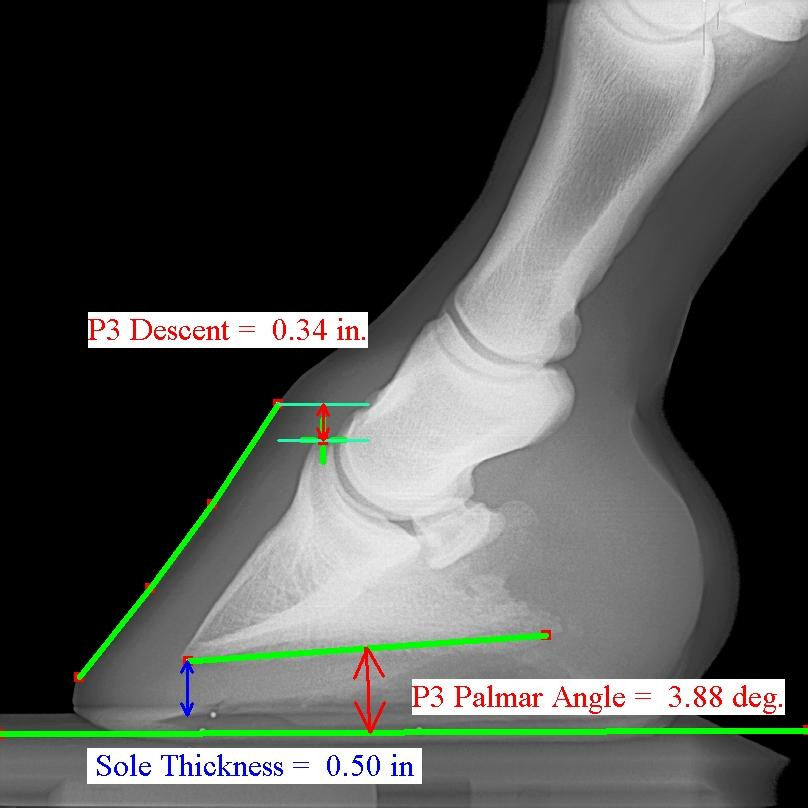 Figure 7: The lateral (side view) radiograph shows many interesting aspects of the hoof. Here we show only three of the most basic measurements.

The palmar angle (angle taken from the bottom of the pedal bone relative to the ground) is important. A negative palmar angle can spell trouble, and so does a very high palmar angle. The sole depth is another parameter that is important. Ideally a horse should have anywhere from half an inch to an inch of sole. Anything less may lead to a sore-footed horse. The sole is not the primary factor for shock absorption but it plays an essential part to support the load placed on the hoof. It helps protect the pedal bone and insulates soft tissues against cold and heat.

Thanks to digital cameras, digital x-ray systems, and modern software [1], veterinarians, hoof trimmers, farriers, and even owners have gotten increasingly interested in measuring the horse’s foot. Some forward thinking veterinarians who preach “preventative hoof care” advocate taking yearly x-rays and using measurements to watch for changes and stay on top of the trimming, shoeing, and overall health of the hoof [2]. Some high-tech hoof trimmers and farriers carry digital cameras with them and take calibrated photos before and after trimming to keep track of their clients’ feet.